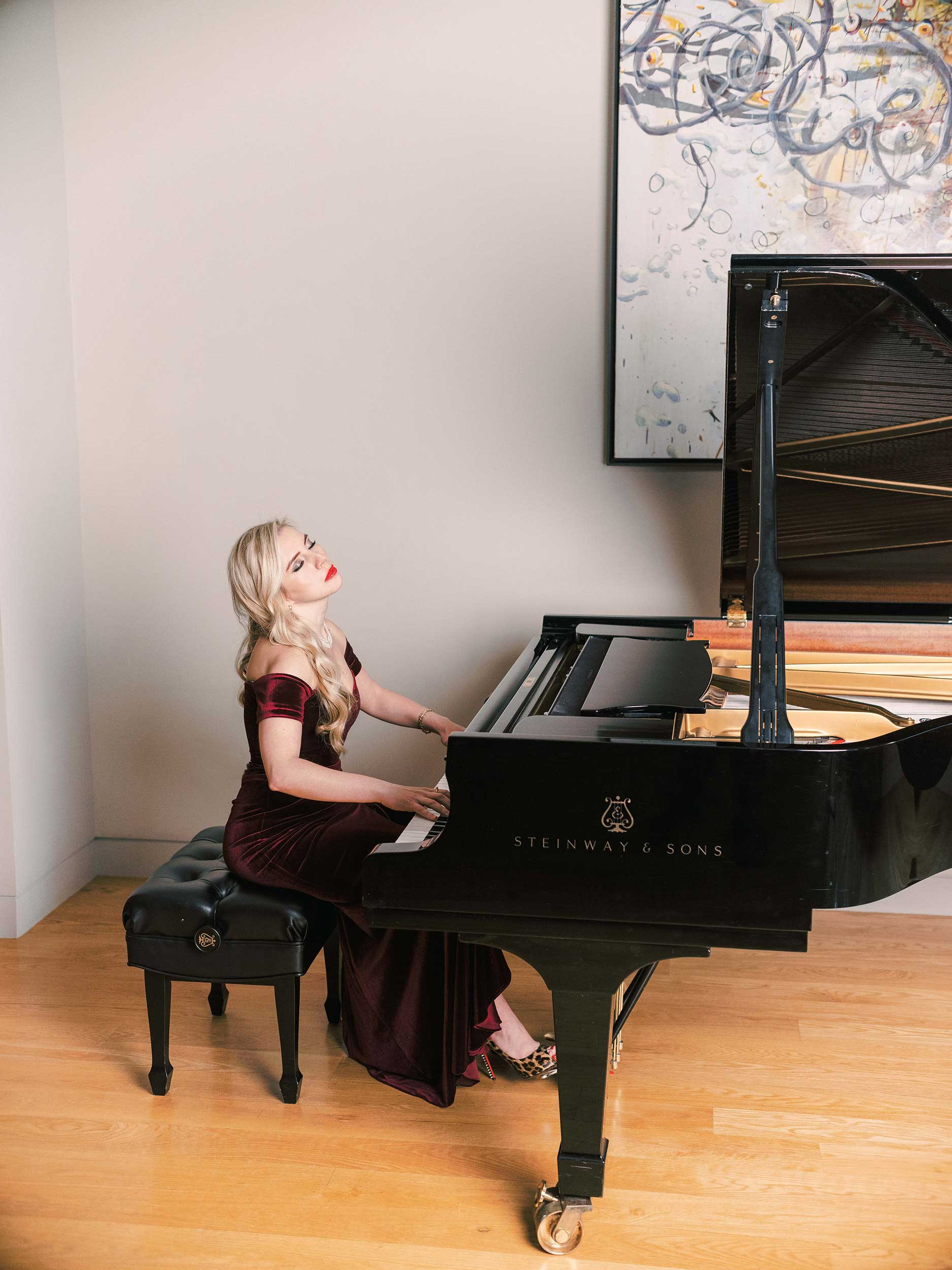 In this month defined by romance, I won’t hesitate to pronounce my (critical) love and affection for these outstanding new classical releases. From rival interpretations of Mussorgsky to choral delights by Britten, here are our favorites from February.

Jean Sibelius once admonished his son-in-law, composer Jussi Jalas: “The framework of a symphony must be so strong that it forces you to follow it, regardless of the environment and circumstances.” How fortunate, then, that the environment and circumstances behind this formidable Sibelius cycle are as strong as the works themselves. Recorded in the resonant acoustic of the Philharmonie de Paris during Paavo Järvi’s six-year tenure as chief conductor of the Orchestre de Paris, these incendiary performances set the Finnish composer’s notoriously chilly symphonies ablaze. Even the brooding Symphony No. 4 in A Minor, Op. 63, once described as “a lost soul in search of a final home,” thaws at the warmth of Järvi’s light touch and keen insight. Available on Presto Classical.

Clara Schumann’s splendid Three Romances for Violin and Piano forms the core of this bold album from British violinist Tasmin Little and pianist John Lenehan, paired with sonatas by Dame Ethel Smyth and Amy Beach. Both sonatas, with tempestuous outer movements and sparkling, folksy scherzos, are indebted to the free-flowing brand of Romanticism that Schumann, as much as any of her male contemporaries, helped create. (The ties run deeper than that — long before she was knighted, Smyth met Schumann while studying at the Leipzig Conservatory). Little and Lenehan make their case for these underappreciated works with urgency, brilliance and brio. Available on Arkivmusic.

Mussorgsky: Pictures at an Exhibition / Fred Hersch: Variations on a Theme by Tchaikovsky

Mussorgsky: Pictures at an Exhibition and Other Piano Works

Pianists Natasha Paremski and François Dumont each released albums showcasing Mussorgsky’s Pictures at an Exhibition in late January. Like art students from rival schools sketching a great masterpiece, they approach its recreation from wildly differing perspectives. Dumont’s strokes are deliberate and defined — Paremski smears, scrawls and smudges. Take Gnomus, the suite’s opening movement. Where Dumont envisions the titular gnome as an impish lawn ornament, Paremski unleashes a rancorous creature plucked from the bestiary of Narnia. Bydło, a later movement that depicts a plodding oxcart, provides even starker relief. Dumont plows forward with the stateliness of a Maserati that’s just suffered a flat: ignominiously rickety, but not for long. Paremski’s gratuitously choppy playing conjures a different breed of vehicular vulgarity: think Fred Flintstone’s wheels with the suspension of a Soviet-era combine. Inherently visual music is best understood in composite. Thankfully, in 2019, there are many ways to view these pictures on the wall. Available on Presto Classical – Paremski, Dumont.

Benjamin Britten, describing the end of Mahler’s Das Lied von der Erde, wrote: “It is cruel, you know, that music should be so beautiful.” One gets a similar sense of rapture — and of just how tantalizing, fulfilling and ineffable music can be — from this collection of Britten’s choral works, transcendently sung by Berlin’s RIAS Chamber Choir. Much of this music, like “Concord,” the second of six “choral dances” from his Gloriana, is entrancingly still. But quietude is not Britten’s only method of transfixing. “God’s Grandeur,” from Ad majorem Dei gloriam, extols with elaborate counterpoint and clamoring fanfares. Most spellbinding is the 1942 masterpiece Hymn to St. Cecilia, Op. 27, a paean to the patron saint of musicians — its harmonies, astonishing and otherworldly, creep into the furthest reaches of the musical sublime. Available on Arkivmusic.

Juan Crisóstomo de Arriaga, the so-called “Spanish Mozart,” was born 50 years to the day after Wolfgang Amadeus, and like him produced a lauded body of work in his tragically short life (he died just shy of his 20th birthday). While best known for his three ingenious string quartets, some of Arriaga’s greatest orchestral accomplishments are compiled on this release from conductor Juanjo Mena and the BBC Philharmonic Orchestra. Mena coaxes lean, hard-nosed playing from his orchestra, which lends itself to Arriaga’s feisty Overture in D Major, Op. 20, and his Symphony in D, a work defined by intriguing tonal ambiguity. But the unquestionable highlight here is the clarion singing of Norwegian soprano Berit Norbakken Solset, who brings regal elegance to Arriaga’s cantata Herminie. Available on Arkivmusic.

The latest from acclaimed pianist (and MacArthur “Genius”) Jeremy Denk attempts to condense the entire history of “classical” music into a 24-piece double-album. The concept is remarkably ambitious, but Denk is the rare artist with the chops and musicological savvy to make it feel intimate and airtight. The first 10 selections are devoted to the pre-Baroque era and demonstrate Denk’s artistry at its most beguiling. His transcriptions of secular and sacred vocal music — from Machaut to Monteverdi — provide extraordinary immersion into the sensitive sound-world of early polyphony. From there, the path is a bit more predictable, but no less thrilling: a heated dialectic between Bach, Mozart, Beethoven, Chopin, Schumann, Liszt, Debussy, Schoenberg and Stockhausen unfolds. It’s anyone’s guess where classical music is headed as we barrel deeper into the 21st century — here’s hoping, no matter the destination, Denk will continue to lead the charge. Available on Arkivmusic.

Italian painter Amedeo Modigliani’s lithe, affecting portraits have fetched more than $170 million at auction. The Modigliani Quartet, sadly, stands to make a pittance of their namesake’s earnings with Portraits, but this album — an anthology of miniatures by 13 composers — is worth every penny. Guided by their deft, empathetic ear and a knack for distilling style and idiosyncrasy, the Paris-based group finesses the fine details in character — things like Shostakovich’s skittish irreverence, Korngold’s winsome naivete and Borodin’s yearning for a sunswept vacation — that make these morsels so compelling. Available on Presto Classical.

Like many cello concertos, Friedrich Gulda’s begins with a lightning strike of virtuosity — a scratchy, syncopated figure that parkours up-and-down the soloist’s fingerboard. The thunder that follows, however, has no precedent. Gulda launches the orchestra — a wind band with a continuo section of drum-kit and electric guitar — into a bona fide disco vamp, over which the cellist yawps and yowls. The effect is endlessly entertaining, though utterly bizarre — as if Rostropovich, possessed by the rogue spirit of Eddie Van Halen, stumbled into a jam session with the Bee Gees. But after a few go-arounds, the Saturday Night Fever send-up halts. The cellist, evidently tuckered, initiates a delightfully bucolic passage, reminiscent of Mendelssohn and Schubert at their most placid. It’s difficult to think of a soloist better suited to Gulda’s absurdist slaloms in mood and reference than Edgar Moreau. Accompanied by conductor Raphaël Merlin and the fearless Les Forces Majeures, he manages the transitions with graceful virtuosity, all the while honoring the knee-buckling angles of their antics. Available on Arkivmusic.